I had a good time in New York – didn’t see nearly as much as I had hoped, but thoroughly enjoyed both Bon Jovi concerts!  The All American Rejects opened for both concerts – Bon Jovi fans didn’t seem really interested, but I like this band – especially their older songs – and enjoyed them as well.  The lead singer is a little weird and one of the guitarists overdid it, but I still enjoyed them.  Oh, and their drummer ROCKED.

The first concert we were in the front row, on Richie’s side.  Check out this awesome shot! 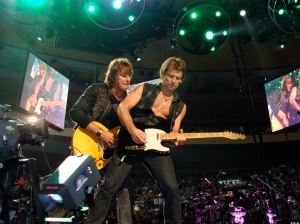 Let me just say this, both men are VERY attractive, VERY charismatic and VERY good musicians!  The first night, I seriously fell in love with Richie – there’s something about an amazing guitarist standing 10 feet in front of you!

Gracie is doing very well!  She was very good for Auntie Rona (and Auntie Stephanie) and is doing much better in a METAL crate (as she tore up the portable one I purchased before I brought her home).  I love her.

The kids are doing quite well, too.  Kirstie is sweet and today I am hanging with the boys.  I love them.  Duh.

This site uses Akismet to reduce spam. Learn how your comment data is processed.