Well, don’t get all worked up! I have a new puppy! Her name is Gracie and I love her! 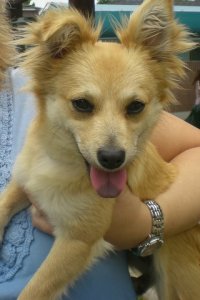 Let me tell you about the history of my Gracie!

As you may remember, I have become very fond of Lady, the beautiful dog that belongs to Sandy. Sandy and Aaron moved to Northern California, and yes, logic tells you that so did Lady! So I was sad and lonely for her….and quite honestly, so was Sofie! So, because she is an awesome friend, Stephanie suggested I should get a cat to make me fill in the void. She found a beautiful Tabby named Lenny at the SPCA near her house. I thought it was a beautiful cat, but due to life and my busy schedule (ha) somehow the topic of Lenny died away. Then suddenly, last week, I start getting messages on MySpace with pics of Lenny from Steph – what is going on? When are we going to go see him! So I pulled Rona in and said, let’s do this!

On the way to the shelter, I began receiving texts from Stephanie describing how cute Lenny was, etc. Then, suddenly, I received a text that read, “I found a little girl dog I have a feeling about. The same feeling I had about Sofie!” Rona and I looked at each other and were like, “WHAT?!!?!!?” But me, being the open minded person that I am, decided I would check out this dog Steph was talking about.

Here she is the day we met her: 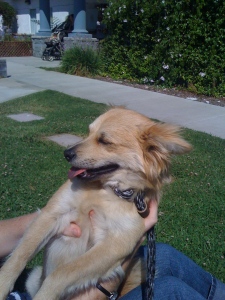 Needless to say, I fell in love – she is so sweet, has a great disposition, and I love her! Lenny was cute, and I am sorry that it didn’t work out, but Gracie stole my heart.

But, there was more in the adoption process in order to secure Gracie into my life! Sofie, Rona’s dog, would be required to meet her and they needed to get along before I would be allowed to adopt her. So, we put Gracie on hold and made plans to return the next day for the ominous meeting.

Although I was a little anxious, Rona and I returned with beautiful Sofie and excitedly waiting for the workers to bring out Gracie. Would they like each other? What if they didn’t? Suddenly, the worker came out and said, “there’s a little problem”. Apparently, the shelter had a new vet, and to give her plenty of experience with spaying and neutering animals, the shelter was taking all animals that needed the procedure that day. Gracie was one of them, and in fact had already had the surgery and was in recovery. So, no meeting could happen that day! What made it complicated was this was July 3rd and Rona (and Sofie) would be in the mountains until July 9th. So I nicely asked for Gracie to be held beyond the usual 24 hours. Since this was kind of their mess up in the first place, they were nice enough to accommodate this request with no hesitation at all.

So, Wednesday came and I was nervous. Kenny especially had been tortured during the wait, not knowing if things would even work out! The boys and I left for Steph’s house, where we were meeting Rona and Sofie. Then Steph, Rona, Sofie, and I headed to the shelter. We were all so nervous and excited! Sofie was very attached to Rona, as I don’t think she really understood what was going on, but when Gracie came out they hit it off right away! It was so awesome to see! So we got the green light and I was able to bring Gracie home that day!

We went back to Steph’s house where Gracie got to meet Kenny, Josh, Emma, and Austin. And Gracie and Sofie really got to let their hair down! They were running so fast around the backyard and having so much fun! Gracie immediately loved the kids, she is so wonderful! And Sofie is such a great dog, too! I know they will be the best of friends

Here is Kenny and Josh with Gracie: 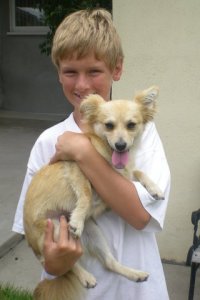 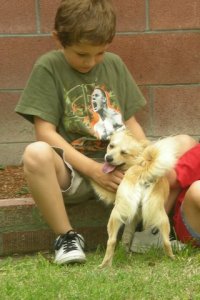 The shelter told me that Gracie is a Chihuahua Mix. Don’t know what is mixed in and I don’t see the chihuahua part really, but it doesn’t matter. I love her. She is very affectionate and did well at home and overnight. I put her in a crate and I think she would have preferred sleeping with me, but that will come in time.

Today, we are going to the vet to make sure everything is cool!

I am sure I will be writing more soon! I feel so great because I know I will have this dog her entire life and that makes me happy!

Gina, and Gracie, out!

This site uses Akismet to reduce spam. Learn how your comment data is processed.